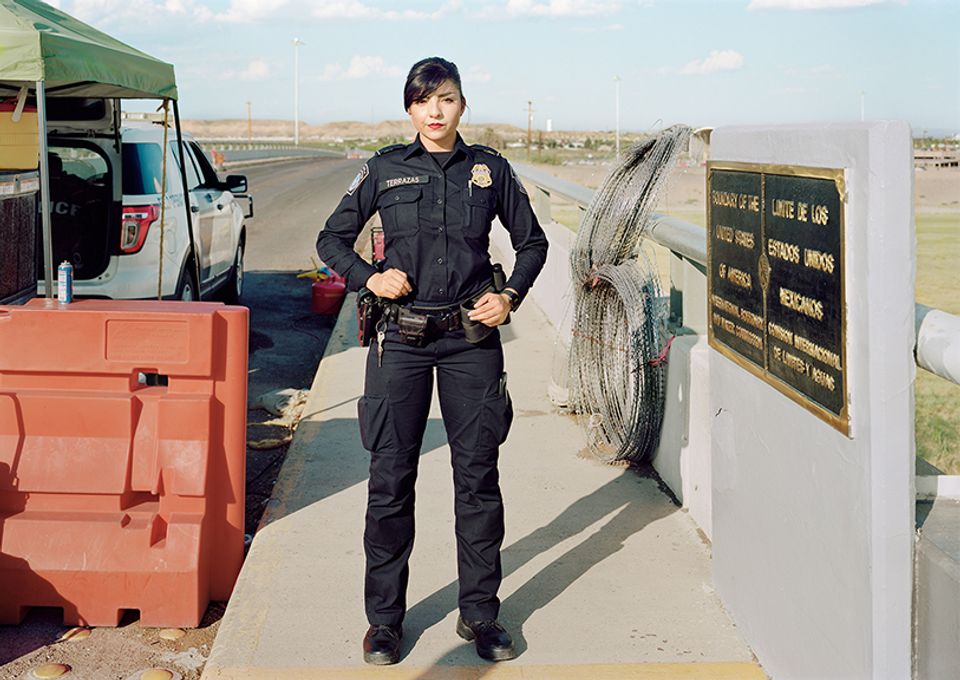 An My Le's Fragment VIII: US Customs and Border Protection Officer (2019) Courtesy the artist and Marian Goodman Gallery New York/Paris/London

Prompted by a mass shooting at a church in Charleston, South Carolina, in 2015, the Vietnamese photographer An-My Lê embarked on a US road trip in a bid to chronicle complex, tumultuous fragments of American history. In Silent General at Marian Goodman Gallery (until 29 February; free), An-My focuses on displaced individuals trying to thrive and survive under Donald Trump. The titles alone—including Fragment I: Sunday Mass, November 6, New Orleans, Louisiana—eloquently reflect the artist’s stoic, substantial evolving journey. An image of a group bathing gracefully in the waters under the Presidio-Ojinaga International bridge, on the Texas/Mexico border, shows a family in flux, ruminating on their surroundings. Migrants are not the only thing on the move: one of the photographs shows statues of secessionist generals Robert E. Lee and P.G.T. Beauregard sequestered in temporary wooden housings at Homeland Security Storage. Unpicking the iconography of confederacy sculpture, a loaded symbol of the country’s past, is a clever way of dissecting the American dream.

Artists, Friends, Racists, an exhibition of new works by the New York-born artist Jordan Wolfson at Sadie Coles HQ (until 29 February; free) combines highly personal, nostalgic elements with a virtuoso hyper-technical display. The personal comes in the form of childhood snapshots emblazoned across wall-mounted brass panels that recall gilded medieval altarpieces. The works, showing the artist as his happy younger self, look especially liturgical in a specially designed rotunda space. The hi-tech part is a series of spinning fans with LEDs embedded in their blades, projecting a series of animated characters, symbols and phrases. These include the words “artists, friends and racists”, the title of the show, interspersed with a plethora of totemic contemporary icons, including Sesame Street characters and 9/11 firefighters. The work is a head-spinning trawl through US culture, splicing and dicing symbols of Americana, made all the more unsettling by the silent, contemplative whirr of the gyrating fans.

Dark and pensive, the prints on show at the Mosaic Rooms capture the current mood of London in the depths of winter and amidst the fallout out of Brexit. Homeland Under My Nails (until 26 April; free) is a small exhibition of works surveying the career of the Sudanese painter and printmaker Mohammad Omar Khalil. Despite being a prolific artist—his New York studio where he lives and works is full to the brim with books, prints, paintings and materials, as a video in the venue’s basement space shows—Khalil has not exhibited widely or commercially outside of the Middle East and this is his first UK solo show. Born in 1936 in a village in Khartoum, Khalil has travelled and lived in Italy, Morocco and New York and this show follows how each place has influenced and inspired his work. His images are very dark and predominantly monochrome. “In blackness, I see degrees and shades of rich, complicated colour, more intense than in other colours, roaring and loud,” Khalil says. The best prints in the exhibition are the self-portraits, which show an artist who is constantly and intensely examining his own identity and position as a black artist living in foreign lands. Also on display is a beautiful handmade artist’s book Season of Migration to the North, named after the novel by the Sudanese author Tayeb Salih, which includes original etchings by Khalil that respond to the lauded postcolonial novel. The artist’s book is an ode to Sudan, a place that lingers in the mind and work of Khalil: “My homeland exists in my nails, it expresses itself whenever I create an artwork.”