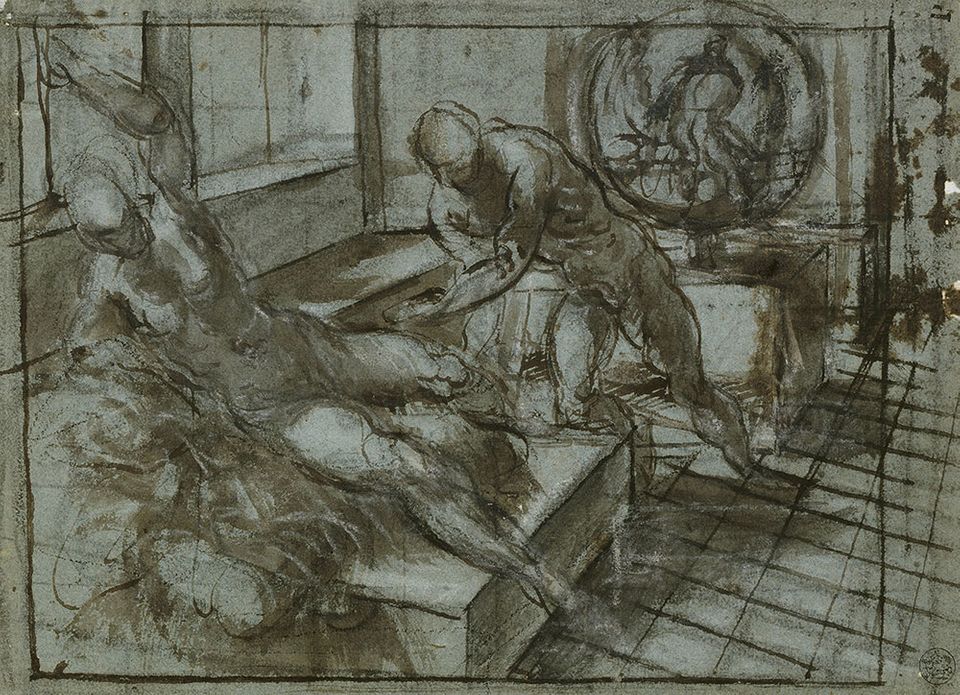 Students, scholars, and art lovers—and especially young curators—should see Drawing in Tintoretto’s Venice, the Morgan Library’s new show celebrating the artist’s 500th birthday. It is a lovely, bracing primer in how to do an exhibition: perfectly sized, with about 70 drawings and a few relevant paintings, it shows gorgeous, rarely seen objects, makes its fresh, overarching point early, delivers the evidence in an elegant narrative, and its tangents are both relevant and provocative.

Jacopo Tintoretto, the show titular star, was a prodigy in the 1540s. But he offended the revered Old Master Titian and many others with his pushy manner and flashy, slashing painting style. Titian thwarted his career, which must have hurt Tintoretto deeply, but by the 1550s he had found a niche working for neighbourhood churches and the city’s Scuole, or high-end social clubs, and later, for top politicians in charge of the Doge’s Palace. He delivered good work quickly and found big surfaces were suited to an aesthetic combining bill-board directness with acrobatic drama.

He has been somewhat inaccessible to audiences in the US since so much of his best painting stayed in Venice, and there has not been a thorough drawings show since 1956. He was misconstrued for years as an impulsive, spontaneous artist who never planned and decided at the last minute what he was going to do. The show continues the recent good work debunking this. His drawings show he was a quick study, yes, and restless. His is the vision, logic, and discipline of a bloodhound.

More significantly, the show demolishes one of art history’s oldest dichotomies, referenced like a Supreme Court precedent and repeated with the monotony of a chant. “Disegno versus colorito” was an either/or art camp first offered by the Renaissance artist and historian Giorgio Vasari to distinguish a careful, intellectual process of design that was based on increasingly polished preparatory drawings and a more instinctive, painterly approach to the finished work of art that put experimenting on the canvas rather than the separate sheet. Letting colour and a free, loaded paint brush do the heavy lifting was Venetian. You were either a draughtsman or a colourist.

This is a grossly simplistic divide. It assumes artists think like academics. Academics are drawn to formulas, categories, and theories. Artists do what works best, given the materials at hand, on a case-by-case basis, driven by mood and temperament. A great artist is not finicky. Inspiration can come from anywhere. 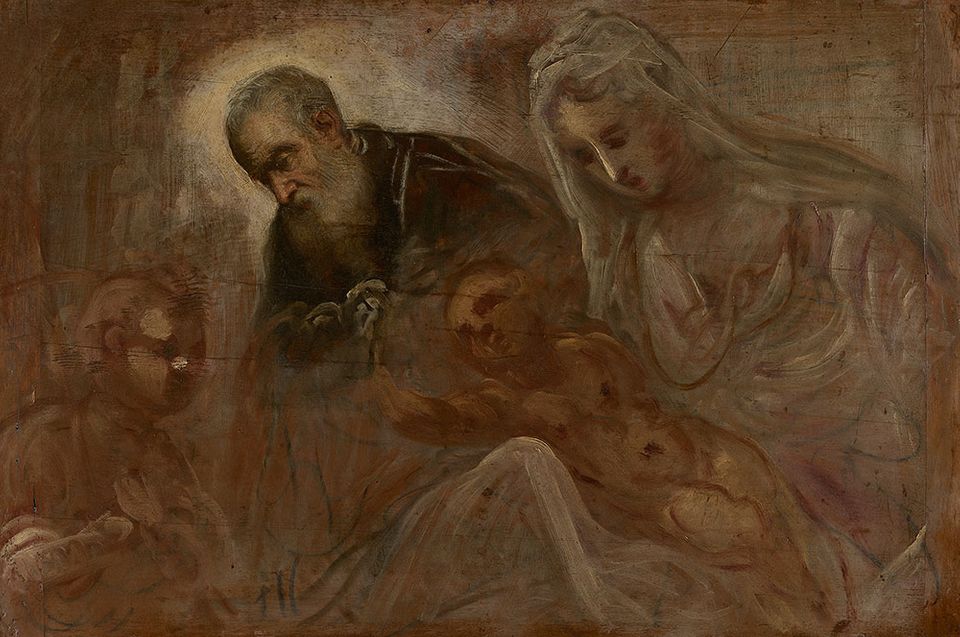 In the first section, the show gives a concise survey of Venetian drawing in Tintoretto’s youth anchored by a late Titian drawing from the Fitzwilliam. It suggests a nuanced practice. Venice was the world’s crossroads and the city’s artists were not insular, they used a broad range of techniques, media, and methods of drawing. Titian used different papers, sometimes pen and ink, sometimes black chalk. His drawing never aims at an overall composition where every element strives toward its final spot. It seeks mood and movement; light and shadow jostle.

Drawing in Venice did not start with “first thoughts” and proceed step-by-step in cerebral, logical development. That, to be sure, was more of the style in Rome and Florence. Venetians loved their lines and structures, they just approached them more haphazardly, keeping in mind that the finished painting could not look fixed or stony but living, warm, and lissome. There were slight variations in drawings by Paris Bordone and especially Andrea Schiavone, both older than Tintoretto but, like Titian, role models. Their drawings are loose and expressive, combining ink and wash and coloured chalk to develop atmosphere, weight, depth, and fluid movement at the same time. 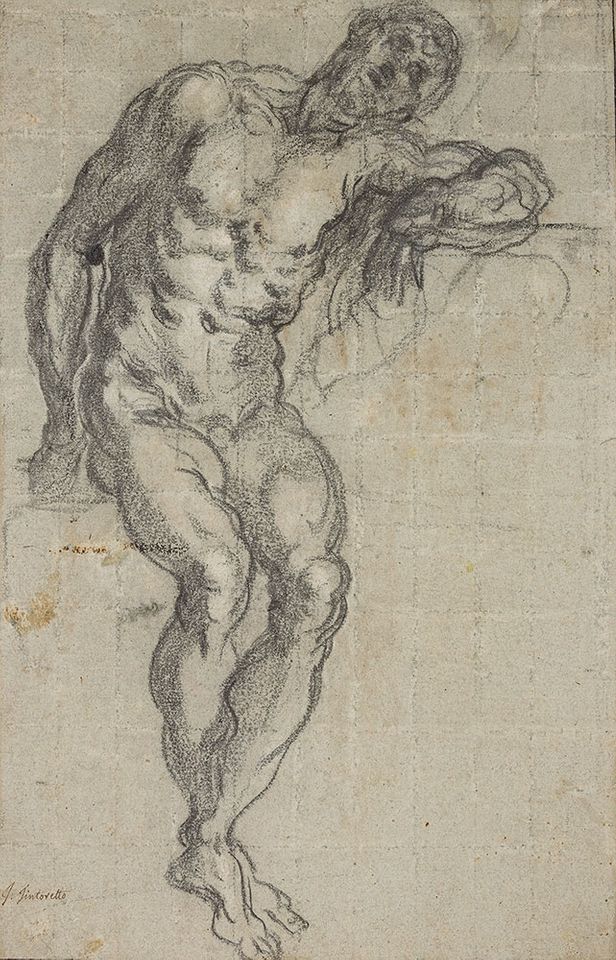 The earliest Tintoretto drawings, from the mid-1540s, start with thick, loose chalk lines covered by brown and white oil paint dragged across the surface, one giving structure, the other tactile mass. He was still having trouble with figures in his paintings from the period—a teenage gawkiness—but in Tintoretto’s Seated Male Nude (around 1649), a drawing on loan from the Louvre, all the body parts click. In a single drawing, he would slightly adjust contours to get the right balance between a chalk line and grainy passages of rubbed chalk for depth. When the drawing evolved into a painting, Christ Mocked, the effect was a wondrous naturalism.

As much as Tintoretto worshipped Titian, he looked to Michelangelo. He made over 100 drawings from copies of Michelangelo sculptures, learning how to capture the torqued presence and majesty of his figures. The Louvre drawing was a life study, but as Tintoretto grew busier, he would do layer upon layer of drawing on a single surface, adding paint along the way. Works sometimes started as drawings, then morphed into painted drawings, then drawn paintings, and then a finished painting for which the objects leading to it were more inspirational than procedural. Drawing, though, was always foundational. 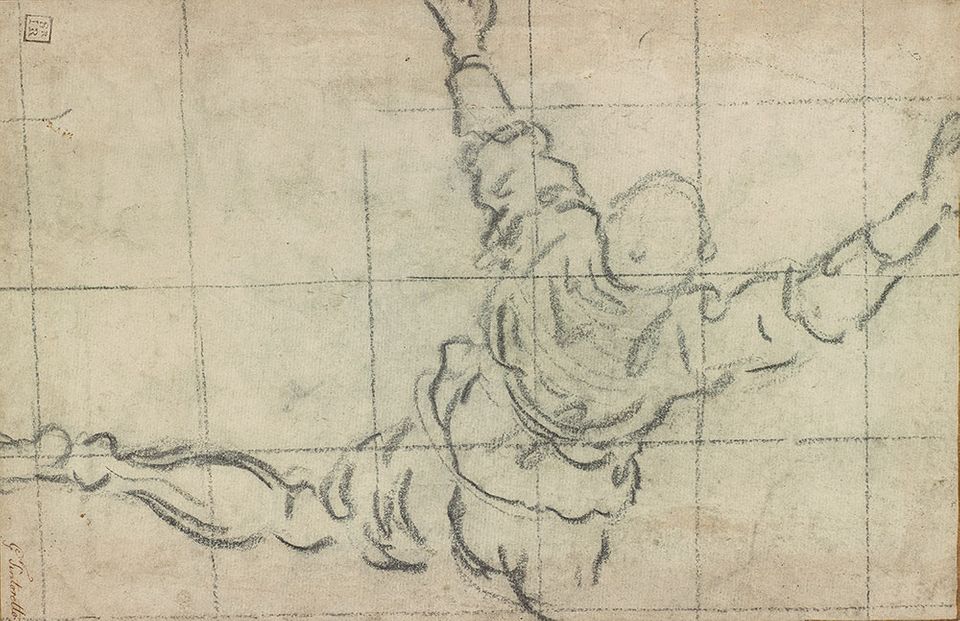 Tintoretto often made quick drawings comprised of segmented lines, like the Albertina’s Seated Man with Raised Right Arm (around 1577). They look modern because they are so economical and abstract, basically ripples. They have an attractive, nervous quiver. Tintoretto probably did these for his growing army of assistants as a reminder that figures have to look like they are moving through space and not leaden lumps.

The show ends with a surprise—and a mystery. By 1590 or so, Tintoretto’s shop was increasingly managed by his son, Domenico. The drawings of the two are compared, and Domenico’s are not bad. To grab from Mark Twain, it is just the difference between lightning and the lightning bug. If the show were chronological and boring, that would have ended it. 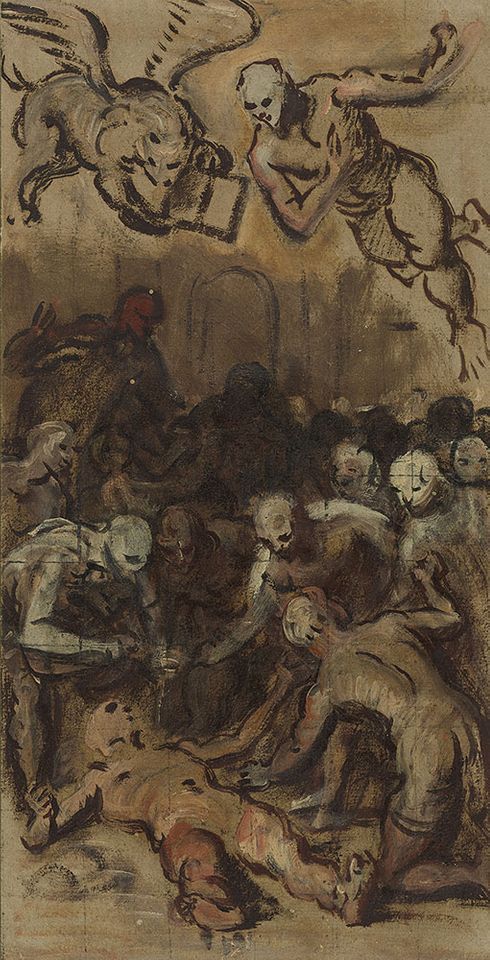 Instead, the show closes with El Greco. It is impossible for me not to look at Tintoretto without thinking of El Greco, who knew his work thoroughly and might have worked for him before going to Rome and then to Toledo. El Greco took Venetian colour and especially Tintoretto's acrobatic figures to Spain, pushing both features to extremes in his unique way. The question of El Greco drawings is a fraught one, in part because Spanish Old Master artists usually did not keep their works on paper. They were like drafts of a letter, trashed as the finished painting took form, and were just not collectible. The show gathers the candidates that could be El Greco’s work and uses the best connoisseurship to solve the problem.

The Morgan Library’s show will join the Tintoretto retrospective now in Venice when it goes to the National Gallery of Art in Washington, DC next year. The Venice show is worthwhile, but does not have an abundance of new thinking. The drawings scholarship will add a special sauce to what is really a nice reprise of the Prado’s 2007 retrospective.