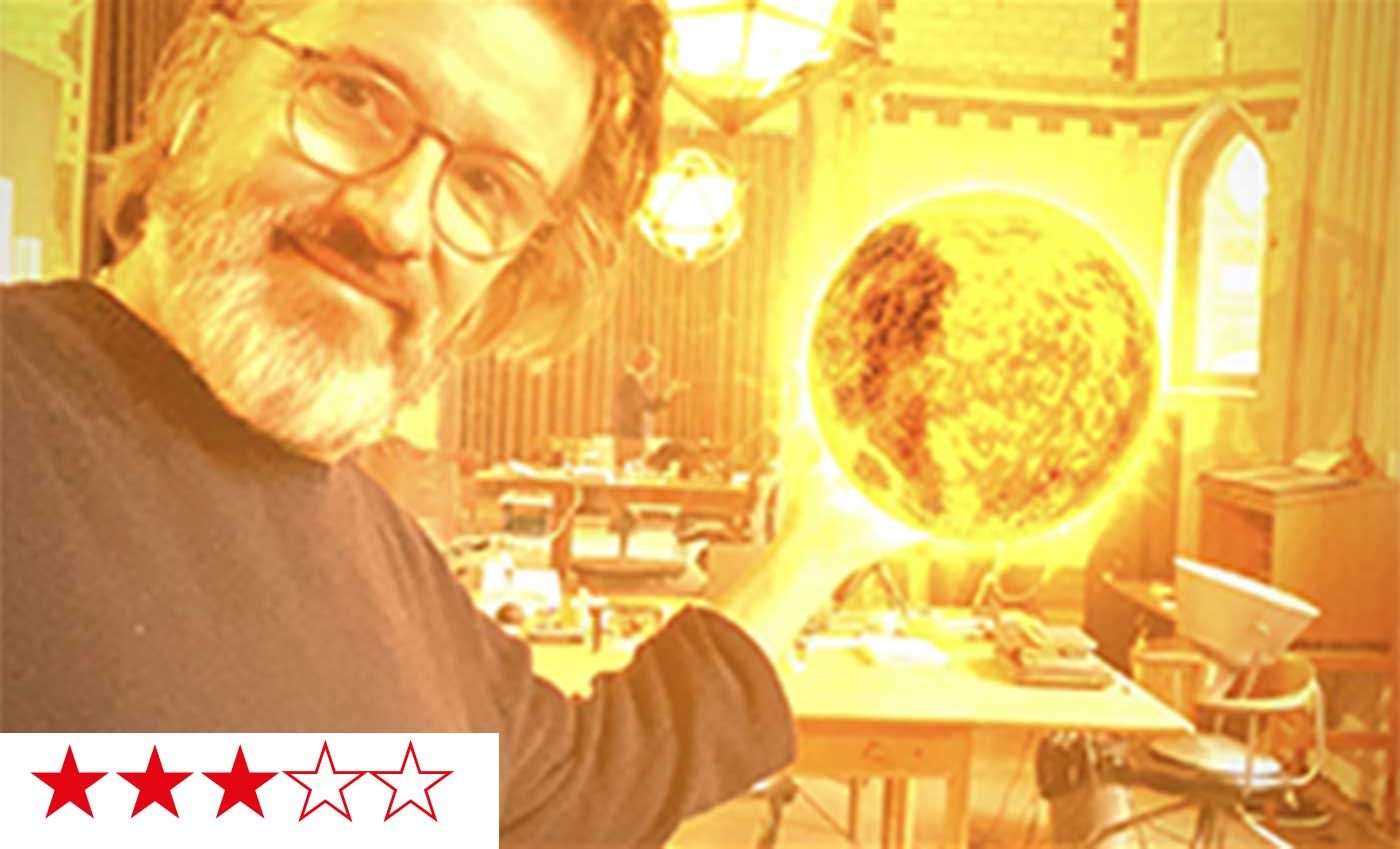 An augmented reality smartphone app that enables you to view the first augmented reality artwork by the Icelandic artist and curator Olafur Eliasson – including an animated puffin, a rainbow, a haloed sun, a rain cloud – in your home environment.

Where to find it

Olafur Eliasson: Today, where physical distancing guides our lives, it’s as crucial as ever that we surround ourselves with things and atmospheres that really matter to us. All elements of the Wunderkammer play a role in my life. Some are objects that we normally take for granted – and I feel they should be celebrated like the wonders they, in fact, are. Other elements in the collection will be more experimental, such as light sculptures and objects that are invisible to the eye until you ‘catch’ them with your hand.

A day in the sun in Seoul. Thanks to Park Kyung-mee, of PKM Gallery, for sharing. LATER TODAY: Join Olafur and @lilycole at 7 pm London / 8 pm Berlin for an Instagram Live conversation on ‘Imagining the Future of the Planet’ in the context of Olafur’s new AR artwork WUNDERKAMMER, 2020, @nowness and here. #myWUNDERKAMMER #oeWUNDERKAMMER @acuteart_

It is easy to share experiences on Wunderkammer on social media https://www.instagram.com/studioolafureliasson/

Gretchen Andrew: Nature and our impact on it have been Olafur Eliasson’s primary preoccupations, often explored through monumental and physical immersive installations carefully constructed and controlled by the artist’s keen sensibilities of the impact of light, moisture, and material opacity. And so it was odd to download an app that further empowered humans to do as we wish not just with nature, but also with Eliasson’s work.

Download the app and without reading the instructions you are off arranging weather as if arranging furniture. A rainbow in the kitchen, why not? A Puffin to rest on your child’s head? Of course. There is certainly joy in making it rain on your unawares husband as he watches TV and then using the social share integration to send to his friends,  though this is ultimately indistinguishable from “non-art” AR applications like “AR Make it rain” which freezes less often.

For fun, it is fun. And Eliasson, who also made a more successful and medium-specific VR experience with Acute Art, seems to have worried the conceptual impact of translating his work into AR for this app. Still, I can’t help but feel that the decision to give us all the illusion of controlling the weather undercuts the artist’s tight and serious concern for humanity's relationship to the environment.

As such I think we should consider the app the giftshop postcard of the artwork. You can bring it home. You can share it with a friend. It is a way of Eliasson keeping in touch, perpetuating and popularising a brand, while also collecting a few micropayments.

It says, “Remember me, I have not forgotten you stuck at home. Remember me, and I promise to delight you when this is all over.”

Is the app easy to use?

Carole Chainon: Easy to use overall. The onboarding (the app tutorial) was fluid, using a six-swipe process. The object placement is straightforward though the surface detection is not 100% accurate (I was using a Samsung S9+) and I sometimes lost the object while moving around. I appreciated how easy it was to replace the items in different places.

Dhiren Dasu: I found it intuitive, easy to navigate, with simple instructions, and stable on an Android phone. Was able to load multiple objects in a variety of spaces and lighting. For non-technical users, it would be useful to add a splash screen with a quick playthrough-type animation of how to use the app.

Eron Rauch: I love that this has a well-illustrated tutorial. Placing the object seemed somewhat fussy: I thought the app was buggy because it couldn't read my large table as a viable target for placement. But I got it working OK eventually. It was a little laggy, on a Samsung S7, so the fact it runs solidly on such an old phone means most people will be able to use it.

How good is the art?

Carole Chainon: The rain sounds were pleasing and made the experience more immersive through my phone. I would have appreciated having more interactivity and to be able to scale and place several of the same items in the same scene.

Dhiren Dasu: Eliasson’s artwork is good and renders very well. The cloud object was a highlight for me. The quality of the clouds as well as the semi transparency really helped sell the illusion. The interactivity of being able to click on the clouds to unleash the rain was very effective. The horizon line of the rainfall puddles succeeded in tricking my eyes. The northern lights object and the sun object both spill light on to all the other real objects in the space in a visually pleasing manner. Overall the quality of rendering is quite sharp and holds up well.

Eron Rauch: The 3D rendering of the objects is quite dated by the standards of the other apps and mobile video games on my phone. The more complex objects, like the tuft of plants/flowers, suffered up close. The works seem a bit trite. This impression might have been influenced by seeing that I could pay $2.49 for a premium piece of content: a ladybug. That made it feel very much like a generic sticker pack to put on a school notebook (without the aesthetic mayhem of Lisa Frank or such). I wonder how many people purchase the premium content? I guess, if I wanted to run around and see ladybugs and rainbows and cartoon characters, I'd just play Animal Crossing like everyone else.

What is gained by viewing in AR rather than In Real Life?

Carole Chainon: Most of the artwork is well suited for AR, taking into account the limitations of mobile. The cloud, sun, rainbow and aurora borealis are fun to see in places they would never be.

Dhiren Dasu: These pieces would be impossible to see in real life from all these different perspectives, and are an excellent way to create art that would not really exist in any other medium. The juxtaposition of the real and the overlay of virtual elements has the potential to be a surrealist fever dream…. In the best possible way.

Eron Rauch: One of the curiosities of AR is that it is highly contextual. While I was using the app, the flock of wild parrots that live on our block landed in the abandoned house next door. This provided direct competition to the content of the app. In another instance, the app covered up some of the art I had on my walls. These are ideas that artists and institutions using AR are going to have to navigate.

Highly contextual: the AR elements can be viewed in all and any environments

Does it break new ground technically?

Carole Chainon: This app uses mobile AR plane detection for 3D object placement. While it breaks no new ground technically, it is a useful introduction for a wider audience to the power of AR.

Dhiren Dasu: As art the work is probably better judged by its ability to offer users new perspectives and a way to turn a familiar environment into a magical one. In that, the app surely succeeds.

Eron Rauch: The art seems to highlight one of the issues that plagues AR, which is the "why"? AR, as a technology, has value in terms of letting users tangibly understand scale (which is challenging in 2D image galleries or books). Many of the choices in Wunderkammer merely add a digital plant or a high-end toy to your home for the few moments that you feel comfortable walking around with your phone up.

Gretchen Andrew is a Search Engine Artist and Internet Imperialist who programs her vision boards to manipulate the internet with art and desire.

Carole Chainon is the co-founder of JYC, a XR development and production studio based in LA with a presence in Europe, creating XR experiences for the entertainment and enterprise sector. She is also a Spark AR Creator.

Eron Rauch is an artist, writer, and curator whose projects explore the infrastructure of imagination, with a focus on subcultures, video games, and photography history.

Dhiren Dasu is a digital media creator and consultant. His areas of speciality include photography, film, virtual space, graphic design, visual effects, animation, and audio production. Dasu, in his fine art persona as Shapeshifter7, makes artworks that echo and recompose the architectural spaces he photographs, turning them into immersive spaces.

Kiki Smith, I am a Wanderer is a satisfying digital show organised without a tech team or an app

Kiki Smith, I am a Wanderer is a satisfying digital show organised without a tech team or an app