'Women love my work': David Hockney on his fans

In behind-the-scenes footage from an award-winning documentary, the British artist ponders what it is about his paintings that appeals more to female viewers

In 2006, we were driving back to David Hockney’s house in the Hollywood Hills, after filming at the exhibition Constable’s Great Landscapes: the Six Foot Paintings at the Huntington Library in San Marino, California.

This was a surprising moment: I had not made a connection between his art and female taste, but David had. The question, his answer, his surprise and amusement, is left tantalisingly in the air. Is it the Hockney space that attracts women? And is there such a thing as female taste anyway? Perhaps it is enough to say that David had noticed that women or girls accounted for a substantial amount of his fan mail.

A related aside: I entered into some interesting correspondence with buyers of my DVD on Amazon, mostly Hockney fans, but some had come across it by accident or had been lured in by the customer reviews. I have not conducted any type of gender survey myself, but I did notice that the women customers fell into two groups: those who found David a charming and loveable father figure and those who found him controlling, almost threatening. I rationalised these polar reactions in terms of Hockney serving as a kind of litmus paper, a measure perhaps of a daughter’s personal experience of fatherly authority.

A film-making aside: talking to David on camera had its challenges. With static interviews he would often seem trapped and claustrophobic, a hunted look would come over his face. He would tend to go on auto-pilot and reach for a well-oiled hobbyhorse, repeating things he’d already said almost word-for-word (sometimes useful when editing, since you could then select the best version). But sometimes something would come from left field.

My best formula for getting something more spontaneous and candid was the car. He would be driving, looking away at the road, perhaps it worked like the old-fashioned psychiatrist’s couch—he would feel freer to talk and articulate his feelings, he could find new associations and ideas, as if thinking out loud. The downsides were that I would have to be holding the camera in my hands and after long periods the position was tiring, and he would be in profile and the background to the shot might not work so well. 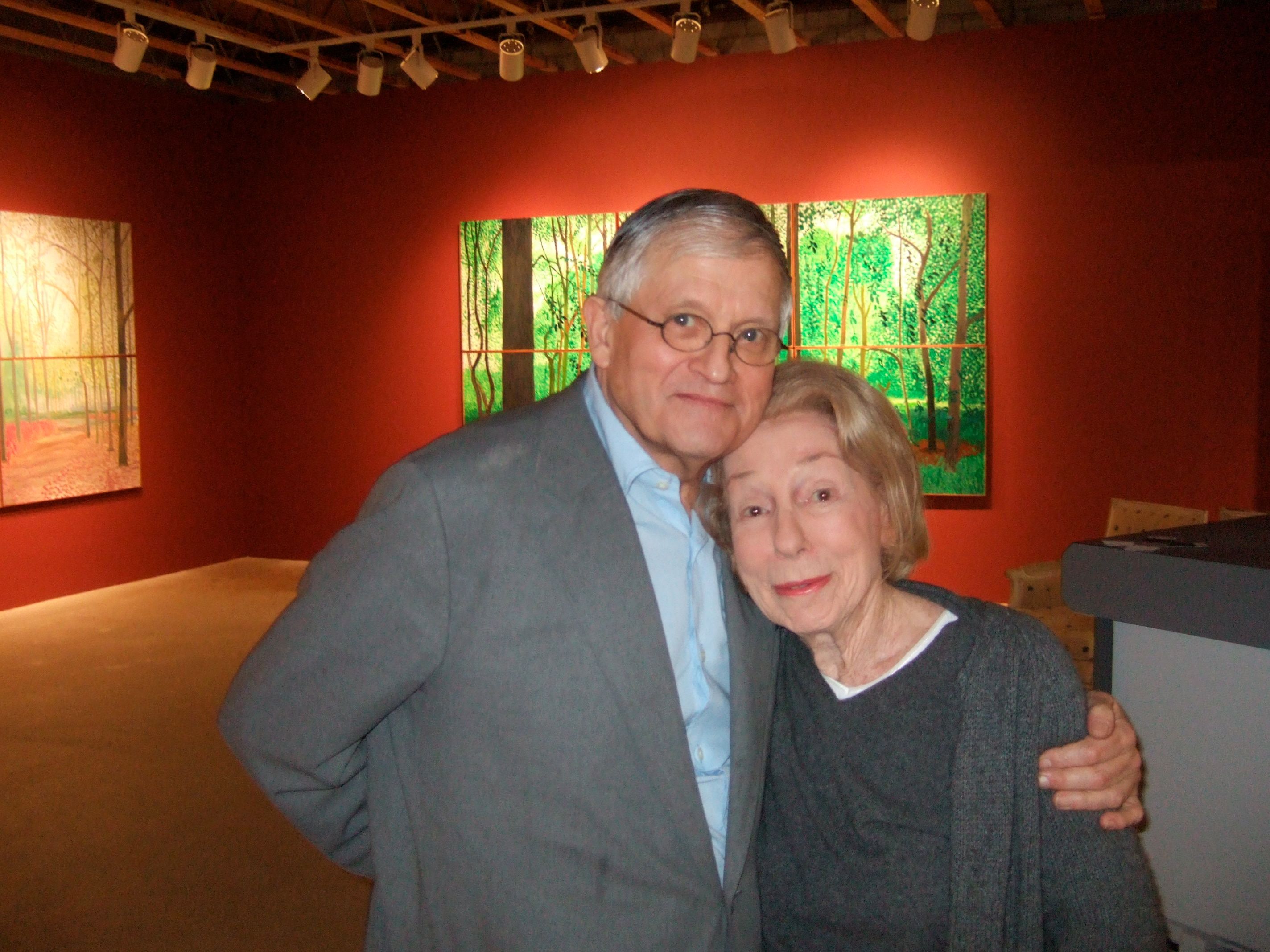 I took the photo of Betty Freeman when she came to visit David at his LA Studio in February 2007. They had met on his first visit to LA in 1964, and she (along with her house and her real and imagined art collection) was the subject of the ironically-titled Beverly Hills Housewife, a 12-foot-long painting Hockney had created on his second visit to the city in 1966-67.

The painting remained in her collection until her death in 2009 at the age of 87. She was a leading patron of contemporary music who had spent her life commissioning works by composers like John Adams, John Cage and Steve Reich. In the 1950s she began collecting paintings by Abstract Expressionist painters like Clyfford Still, Sam Francis and Mark Rothko, then later works by artists such as Claes Oldenburg, Roy Lichtenstein, Dan Flavin and David Hockney.

David has mostly surrounded himself with men. He once claimed that the pitch of the female voice made it impossible for him to understand what was being said on the phone. Face to face was fine. A devoted son to his mother, David is someone who has always enjoyed the comfort and protection of close female friendships: with Celia Birtwell and Ann Upton, most notably. At the same time, he is also attuned to their potential for emotional suffocation. In recent years, his immediate household has been exclusively male.

Thirty-seven years with Richard Feigen: the dealer who was a collector first—and sold to feed his habit

Thirty-seven years with Richard Feigen: the dealer who was a collector first—and sold to feed his habit